The experiment was carried out in farmers' field of Thakurgaon sugar mills area under Old Himalayan Piedmont Plain Soils (AEZ-1) of Bangladesh during the cropping year of 2012-13 and 2013-14 to evaluate ratooning potentiality of some sugarcane varieties. Seven selected varieties viz: Isd 20, Isd 35, Isd 36, Isd 37, Isd 38, Isd 39 and Isd 40 were planted following RCB design with three replications. Significant differences were observed for tiller population, stalk height, stalk diameter, single stalk weight, yield and brix (%) of plant and ratoon crops as well. The tiller population was increased upto 150 days after planting (DAP), after that it was decreased. The highest number of tillers of 278.32×103 ha-1 and the lowest number of tillers of 208.72×103ha-1 were observed in Isd 39 and Isd 37, respectively at 150 DAP in plant cane but the highest (253.30×103 ha-1) and the lowest (175.23×103ha-1) number of tillers in ratoon cane were observed in Isd 37 and Isd 38, respectively at 150 days after shaving (DAS). However, the highest number of millable cane was recorded from the variety Isd 39 in both plant and ratoon cane. The highest cane yield of 103.85 tha-1 was harvested in Isd 39 followed by 98.78 tha-1 in Isd 37 in case of plant crop, while the highest ratoon cane yield of 89.07 tha-1 was recorded from Isd 37 followed by 86.17 tha-1 from Isd 39. The plant crop ensured the higher yield than ratoon crop, but the higher brix (%) was achieved in ratoon crop. In plant cane the highest BCR of 2.60 was recorded with the variety of Isd 39 followed by Isd 37 (2.47) while the highest BCR of 2.75 in ratoon cane was calculated with Isd 37 followed by 2.65 from Isd 39 that is higher profit comes from ratoon cane. However, considering yield, brix (%) and economic return, Isd 39 and Isd 37 may be recommended for cultivation as plant and ratoon crop in Old Himalayan Piedmont Plain Soils of Bangladesh.

Sugarcane (Saccharum officinarum L.) is a perennial crop grows in tropical and sub-tropical countries for sugar production (Mehareb 2015). Like other perennial grasses, it can regenerate shoots from the left over stalks of preceding crops known as ratoon crop. Ratooning of sugarcane is a common practice throughout the world and ratoon occupies almost 50 percent of the total area under sugarcane production (Sundara 2008). It is an age old practice in almost all the major sugarcane growing countries, following at least two even more ratoon from the same plantation (Bashir et al. 2013). In Hawaii, Mauritius, Philippines and Cuba four to six ratoons are quite common (Misra and Mathur 1983). In India, research strategies for sugarcane production through ratooning has been undertaken as an aid to save about 30-35% money spent on the cost of cultivation (Singh et al. 2003). In Bangladesh, only 20% of the cane area is ratooned every year producing in an average 40 tha-1 while the potential yield has been found to be around 80 t ha-1 (Anon 2019). Growing ratoon is 30-40% cheaper due to saving the cost of seedbed preparation, seed material and planting operations (Shukla et al. 2013).

The genetic potential of a variety to give better yields in plant and ratoon cane is the focal point for sustaining high productivity and its acceptance by the farmers for good ratooning potential (Arain et al. 2011). Different varieties do differ in their ratooning potential (Yadav 1992) and any variety may be considered to have good ratooning ability if it can maintain yield and/or it has a high yield potential over the normal crop cycle. Good ratooning ability of cane cultivars is an essential pre-requisite determined by a number of factors. Various plant characters were associated with ratooning ability of sugarcane varieties and success of the variety depends on its ability to provide more profitable ratoon (Tahir et al. 2014). Thus, sugarcane variety which shows good performance in plant and ratoon crop should be promoted for commercial cultivation.

Therefore, the objectives of the present study was to evaluate the ratooning ability as well as the performance of some promising sugarcane varieties grown in Old Himalayan Piedmont Plain Soils (AEZ-1) of Bangladesh.

The experiment was carried out in farmers' field of Thakurgaon sugar mills area under Old Himalayan Piedmont Plain Soils (AEZ-1) of Bangladesh during the season of 2012-2013 and 2013-2014. Seven selected sugarcane varieties viz: Isd 20, Isd 35, Isd 36, Isd 37, Isd 38, Isd 39 and Isd 40 were planted to evaluate the performances as plant and ratoon crop following Randomize Complete Block Design (RCBD) with three replications and the unit plot size was 8m  6m. Two budded setts were used as planting material and planted on 15th November, 2012 in 100 cm apart rows with end to end placement. Fertilizers viz. Urea, TSP, MOP, Gypsum and ZnSO4 were applied @ 358, 275, 240, 188 and 7kg ha-1, respectively for plant cane while full amount of TSP, Gypsum, ZnSO4 and 1/3rd of Urea and MOP were applied in trenches and mixed with soil prior to planting of setts. The second dose of Urea (1/3rd) and MOP (1/3rd) were applied as first top dressing (at 90 DAP) and final top dressing was done with the rest amount of Urea and MOP at 150 DAP. After harvesting of plant cane on 20th December, 2013 and ratoon cane was raised from the left over stubbles of plant cane. Therefore, soon after harvesting of plant crop, stubble shaving was done with a sharp edged spade. Irrigation was applied without delay after stubble shaving. Fertilizers for ratoon crop, Urea, TSP, MOP, Gypsum and ZnSO4 were applied at the rate of 458, 375, 300, 235 and 9 kg ha1, respectively. After stubble shaving and as soon as the soil attained tilth, one third of Urea and MOP, full amount of TSP, gypsum, zinc sulphate were applied in between rows and thoroughly mixed with soil. These operations were necessary to initiate a good growth of ratoon crop. The remaining dose of Urea and MOP were applied as top dressing with two splits, one was after tillering completion stage i.e. 90 days after stubble shaving (DAS) and the other at grand growth phase (180 DAS). Pesticides Regent 3GR (Chlorpyrifos) was applied at the rate of 33 kg ha-1 during planting for the control of termite and Furadan 5G (Carbofuran) was applied (40 kg ha-1) two times in the month of March and May of both the cropping seasons for controlling stem borer. Intercultural operations like irrigation, weeding, mulching, earthing-up, tying and cross tying etc were done accordingly. Tiller population was counted at 90, 120, 150, 180 and 210 DAP and DAS, respectively. Millable cane, stalk height, stalk diameter, single stalk weight, cane yield, and brix (%) of cane were recorded at harvesting time. The brix reading of sugarcane juice was calculated by using a hand-held Refractometer (ATAGO) when, measured water at environment temperature, and adjusted the scale to brix at 0.0% (Zero Set). Benefit cost ratio indicated whether the cultivation was profitable or not, which was calculated as follows (CIMMYT 1988)

formation stage. It was also found that the highest number of tiller population was recorded from 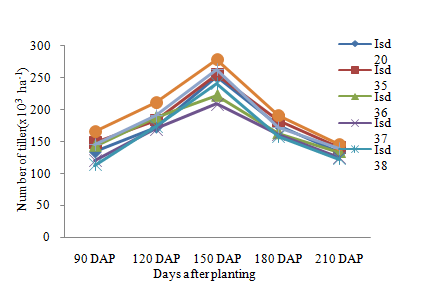 Figure 1. Number of tiller at different days after planting (DAP) of the plant cane 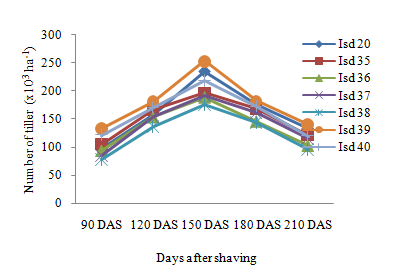 Figure 2. Number of tiller at different days after shaving (DAS) of the ratoon cane

Table 1. Performance of plant and ratooncrop of sugarcane for number of millable cane, stalk diameter and number of internodes per stalk

Table 2. Performance of plant and ratooncrop of sugarcane for stalk weight, cane yield and brix (%)

The results of this experiment indicated that among the tested sugarcane varieties Isd 39 and Isd 37 perform better regarding yield, brix (%) and economic return in both plant and ratoon cane. Thus it can be suggested that these cultivated varieties are suitable for the Old Himalayan Piedmont Plain Soils (AEZ I) of Bangladesh.

Arefin MS, Rahman MM and Alim MA. 2017. Efficacy of organic fertilizer on the growth, yield and quality of sugarcane. Bangladesh Journal of Sugarcane. 38: 31-47.