Rice (Oryza sativa L.) is the staple cereal food for about half portion of the world's populace. The annual production and consumption in Asia is approximately 90%, but average yield of rice grain in this region is low compared to global average yields (Haider 2018). Bangladesh is the 4th largest rice growing country of the world based on rice growing area and production including coarse and fine aromatic rice (BBS 2016). Aromatic rice contributes a little but unique group of rice and has increased greater significance with the overall increment in the demand for fine quality rice. Now a day, aromatic rice has been introduced to the global market. In recent years, the demand of aromatic rice is gradually increasing markedly for both local and global market. Interestingly, the aromatic rice regularly has unfortunate agronomic characters, for example, low yield, weakness to nuisances and ailments, and solid shedding (Faruq et al. 2011). Use of the plant growth regulators (PGRs) in rice has been one of the most potential tools for increasing crop production. PGR as either naturally or synthetic compounds that are applied directly to a target plant to alter its physiological processes or its structure to improve quality, increase yields, or facilitate harvesting control, undesirable vegetative growth of crop plants, enhancing fruiting bodies. Similar PGRs areactive in different stages of the same plant in different ways. An exogenous application of plant growth regulators affects the endogenous hormonal pattern of the plant, either by supplementation of sub-optimal levels or by interaction with their synthesis, translocation or inactivation of existing hormone levels. Hormones regulate physiological process and synthetic growth regulators may enhance growth and development of field crops thereby increased total dry mass of a field crop (Das and Das 1996, Chibu et al. 2000, Cho et al. 2008).

Application of 6-BAP found to increase plant height, number of leaves plant-1, natural product measure with resulting upgrade in seed yield in various plants. The uses of growth substances such as 6-benzyl aminopurine (6-BAP), NAA, GA3 and some others at different concentrations increased aromatic rice grain production (Sarker et al. 2020). It is certain that endogenous and exogenous plant development controllers assume a vital job in adjusting and directing numerous physiological procedures in plants and these procedures are significantly affected by natural conditions. Although some exploration works were done and a few high yielding aromatic rice cultivars were released by Bangladesh Rice Research Institute, our indigenous cultivars were given less attention and their yielding ability was not studied well by using plant growth regulators. Research on aromatic rice using 6-BAP is limited in Bangladesh. Findings in using different PGRs for increasing rice yield in some countries that certainly provide valuable information; those can't be prescribed without preliminary field trial in Bangladesh. Therefore, more researches are necessary to investigate the efficacy of 6-BAP on aromatic rice production. Thus, the objective is to study the growth characteristics, physiology and yield potentials of three selected aromatic rice cultivars in response to 6-BAP.

A field study was conducted at the research farm of the Department of Agricultural Chemistry, Hajee Mohammad Danesh Science and Technology University (HSTU), Dinajpur, Bangladesh during Aman season (July to December, 2017). The experimental area possesses subtropical climatic condition. The air temperature was relatively high (25-32oC) at the beginning of the season and was decreasing (20-26oC) with advancement of the season towards aman with occasional gusty winds. The experiment was laid out in a factorial randomized complete block design (RCBD) with three replications. The experiment comprised three aromatic rice cultivars namely, Chinigura (V1), Kataribhog (V2), Kalijira (V3) and five levels of 6-BAP at the rate of 0 ppm (T1, control), 20 ppm (T2), 40 ppm (T3), 60 ppm (T4) and 80 ppm (T5) spraying twice at vegetative and pre-flowering stages. The solution of BAP 0, 20, 40, 60, and 80 ppm was prepared by dissolving 0, 20, 40, 60, and 80 mg of 6-BAP powder in a litre measuring cylinder in which 5 mL of ethanol prior to dilution was made in distilled water for quick miscible. Forty-day old healthy seedlings were transplanted on puddle plots on 10 July, 2017 according to the experimental design. Three seedlings of the selected aromatic cultivars were transplanted in each hill with a spacing of 15 cm×20 cm.

The height of rice plant at different growth stages was markedly influenced by the application of6-BAP in aromatic rice cultivars which have been presented in Table 1. Result shows that highest plant height was 125.1 cm in V1×T4 at their vegetative stage. At harvest, the highest plant height was observed in V1×T4 and V1×T3 (172.9 cm) which was statistically identical to V1×T1 and V1×T2 (168.7 and 170.4 cm), respecesistance and remains stand against strong wind. Khanam (2016) reported that application of 6-BAP showed better performance on plant height of Kataribhog than those of other two cultivars (Chinigura and Kalijira) studied at both vegetative and harvesting stages.

Result showed that the ltively. The lowest plant height (143.1 cm) was recorded in V2×T1. The plant height of V1 was more taller than V2 followed by V3 plants. The shorter plant is an important desirable index for lodging reaf blade length was insignificant at their vegetative stage but harvesting stage. The leaf blade length of three aromatic rice cultivars at harvesting stage was influenced by the application of 6-BAP which have been presented in Table 1. The longest leaf blade (60.45 cm) was observed in V1×T5 which was at par with V1×T4 (60.44 cm) while the shortest leaf blade (51.22 cm) was 51.22 cm in (V3×T5) which was also statistically identical with V3×T1 (51.67 cm). 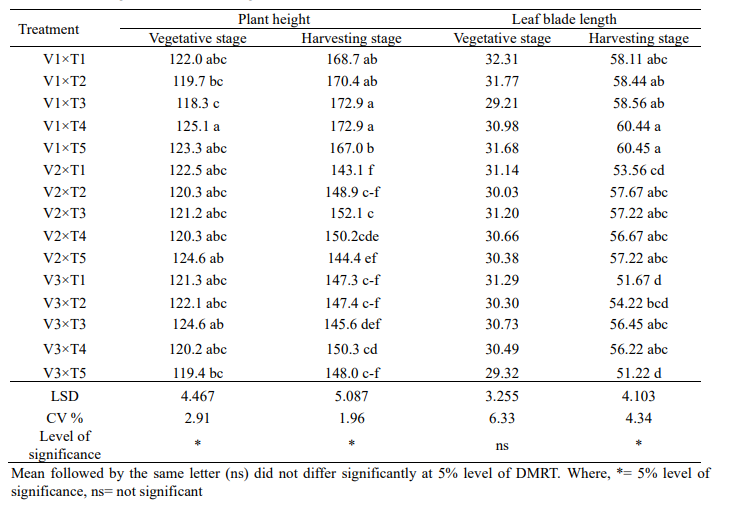 The interaction effect between cultivars and 6-BAP levels regarding total chlorophyll content also statistically significant which is presented in Table 3. Among the BAP levels applied, 60 ppm (T4) BAP showed the better performance on Chinigura. From the interaction, the highest total chlorophyll content was 25.95 mg g-1 with V1× T4 and the lowest value was V3× T5 (18.35 mg g-1) which was statistically identical with V2×T3 (18.72 mg g-1 FW).

Regarding proline content in flag leaves, there were significant differences among the varieties, BAP levels as well as interactions (Table 3). Spraying 20 ppm of BAP at pre-flowering stage, Chinigura produced more proline in comparison to others two varieties. From the interaction, the maximum proline content was 0.353 mg g-1 found in V1×T2 and the lowest was 0.2633 mg g-1 in V2×T4 which was statistically identical with V2×T3 (0.277 mg g-1 FW),V2×T5 (0.270 mg g-1 FW), and V3×T3 (0.273 mg g-1 FW), respectively. NAA while cv. Kataribhog showed better performance at 100 ppm and Kalijira showed better performance at 200 ppm of NAA, respectively (Sarker et al. 2020). 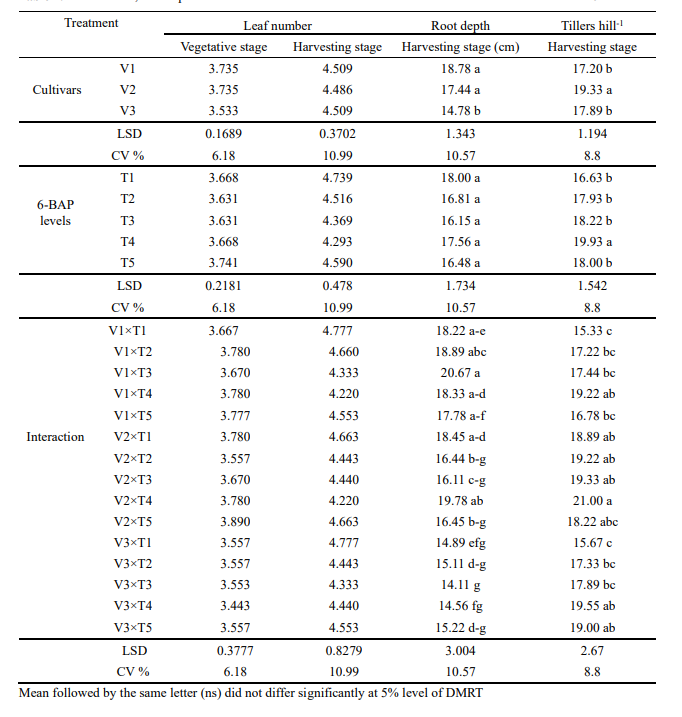 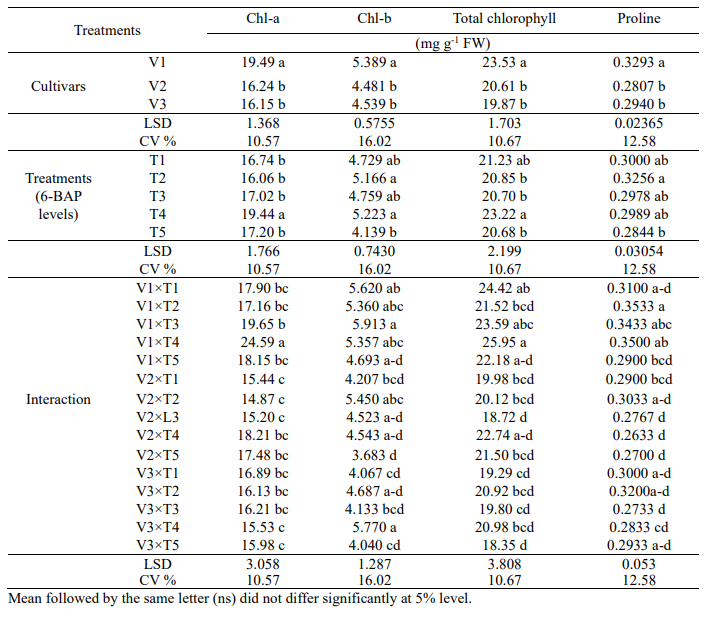 Grains panicle-1: There is a significant effect of 6-BAP on the cultivars and grain –number per panicle was statistically varied due to application of different levels of 6-BAP. Among the cultivars, Kataribhog spraying with 40 ppm 6-BAP (T4) showed the better performance to produce grain number per panicle. The interaction effect of 6-BAP and cultivars was also significant for producing grain number per panicle (Table 4). The highest number of grains panicle-1 (287.0) was observed at V2×T4 while the lowest one (241.1) was recorded inV3×T1 .In this study 40 ppm BAP on cv. Chinigura showed better performance on.

Table 4. Effect of cultivar, 6-BAP levels and their interaction on yield contributing characters of aromatic rice. 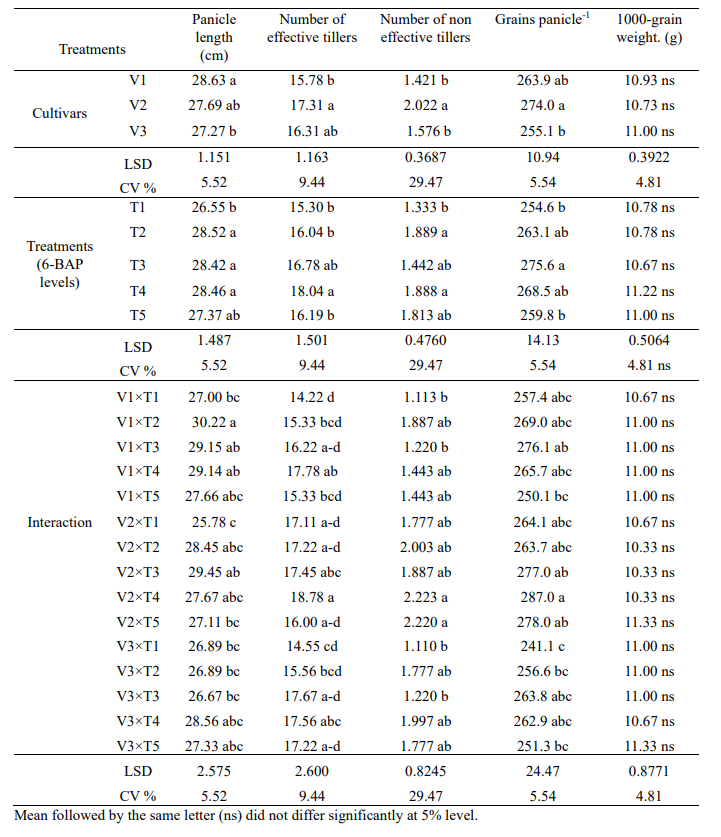 Table 5. Effect of cultivars, 6-BAP levels and their interaction on yield and harvest index of aromatic rice 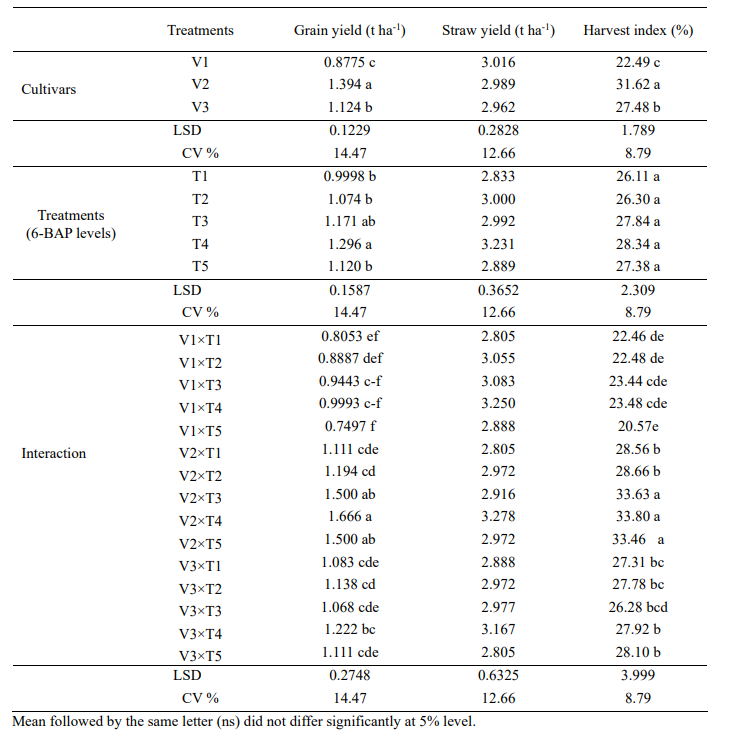 Grain yield: The studied aromatic rice cultivars and different levels of 6-BAP were interacted significantly with each other in respect to grain yield which was presented in Table 5. There was also a significant effect among the cultivars and different levels of 6-BAP. All the cultivars produced lower yield in controlled plants than those of BAP treated plants. Among the cultivars, Kataribhog applying 60 ppm 6-BAP showed the better stimulating effect on grain production. Kataribhog produced the highest grain with 1.0 ton lime residual effect showed the best performance of yield contributing characters in Kataribhog rice such as number of filled grain, 1000-grain weight and grain yield.

Das BC and Das TK. 1996. Studies on the response of GA3, NAA and Ethrel on the vegetative growth and yield of pumpkin. Orisssa Journal of Horticulture. 24: 74-78.

Lee HS. 1990. Effect of pre-sowing seed treatment with GA3 and IAA on flowering and yield components of groundnut. Korean Journal of Crops Science. 35(1): 1-9.

Tonucci LH and Von-Elbe JH. 1992. Kinetics of the formation of zinc complexes of chlorophyll derivatives. Journal of Agricultural and Food Chemistry. 40: 2341-2344.