Influence of gibberellic acid (GA3) on growth, chlorophyll and seed yield of summer mungbean cultivars in Northwest of Bangladesh

Mungbean (Vigna radiata (L) Wilczek) is one of the most important pulse crops of global economic importance. It originated in the South and Southeast Asia and widely grown in Bangladesh, India, Pakistan, Mayannmar, Thailand, Philippinnes, China and Indonesia. Mungbean has special important as an accommodative crop with short growing period along with N2 fixation in soil (Ferdous et al., 2012). Plant growth regulators (PGRs) are being used as an aid to enhance yield of different crops (Nickell 1982, Sarker et al. 2009, Bakhsh et al. 2011). Gibberellins are plant hormones with a wide range of activities including seed germination and cell elongation (Miransari and Smith 2009, Hayashi et al. 2014). Hussain et al. (2018) stated that growth parameters showed increment with foliar spray with gibberellic acid. It .breaks seed dormancy, stems elongation, enhances germination, internodal length, hypocotyls growth and cell division in cambial zone and increases the size of leaves, flowers and pods (Deotale et al. 1998). It is well established that gibberellic acid causes a dramatic increase in growth of mungbean. It increases dry weight (Hore et al. 1988) as well as seed yield (Maske et al. 1998). So, favorable conditions may be induced by applying growth regulator like GA3 exogenously in proper concentration at a proper time in a specific crop. Considering the above fact, the present study was undertaken with the response of mungbean to GA3 inrelation to growth, yield and qualityat Northwest in Dinajpur region of Bangladesh for profitable cultivation.

The experiment was conducted at the Agricultural Farm of Hajee Mohammad Danesh Science and Technology University (HSTU), Dinajpur during the period from March to June 2011. The research site was located in Northwest of Bangladesh, an agriculturally important region. It is between 25.13º N latitude and 88.23º E longitude and at an elevation of 34.5 m above the mean sea level. The experimental land belongs to the Himalayan Piedmont Plain, Agro-ecological Zone (AEZ-1) and Ranishankail soil series classified by FAO (1988). The experimental field was a medium high land having sandy loam soil with pH 5.60. The experiment using three summer mungbean cultivars was considered as factor A (V1-Binamoog-5, V2-BARI mung 6 and V3-Binamoog-8) while factor B were fourtreatments viz,. H1-control (without GA3), H2-50 ppm GA3, H3-100 ppm GA3 and H4-150 ppm GA3. The experiment was laid out in Randomized Complete Block Design (RCBD) with 2 factors. Twenty combined treatments were V1 H1 , V1 H2 , V1 H3 , V1 H4 , V2 H1 , V2 H2 , V2 H3 , V2 H4 , V3 H1 , V3 H2 , V3 H3 and V3 H4 ,respectively for the purposes.Crop management practices like fertilizer, irrigation and pest management were done properly as and when necessary. Three irrigations were applied where the first pre-sowing irrigation was done at the time of lime application@ 1.0 t ha-1and were mixed with soil before two week of seed sowing (Ferdous 2016) for better germination, second irrigation was done after weeding and thinning, and third irrigation was done at flowering stage. Specific concentration of GA3 for experimental treatments was prepared and applied in the form of foliar sprays at 25 and 45 DAS.

Yield and yield contributing characteristics: Three plants were selected randomly from each plot and plant height was measured from base of the plant up to the tip of the main stem. Plant heights of selected plants were taken at 15, 30, 45 and 60 days after sowing (DAS). Leaves (trifoliate) were counted on each sampled plant at 15, 30, 45, 60 DAS and mature stage. Three plants from each plot were collected carefully at 15, 30, 45, 60 DAS and at mature stage so that no root damage occurred. Root volume was measured by water displacing methods using 20 mL measuring cylinder followed by oven dried at 65oC for 72 hours. The average dry root weight was calculated. The number of nodules in the root of each collected plants were counted and noted at 30, 45, 60 DAS and at mature stage.

Seed yield: Seeds obtained from each unit plot were sun-dried and weighed carefully. The pod was collected by handpicking when full maturity came turning brown to black in color. Seed weights of sample plants were added to the respective unit plot yield to record the final seed yield per plot. Seed yield was expressed as kg ha-1 after adjusting at 10% moisture level.

Table 1. Effect of GA3 on plant height of summer mungbean and their interactions 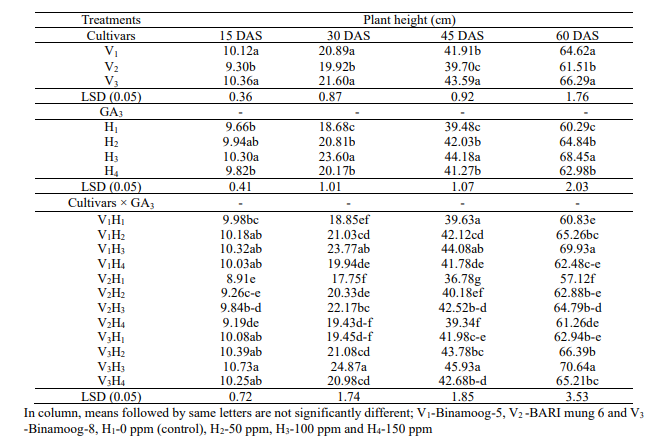 Table 2. Effect of GA3 on number of leaves plant-1 of summer mungbean and their interactions 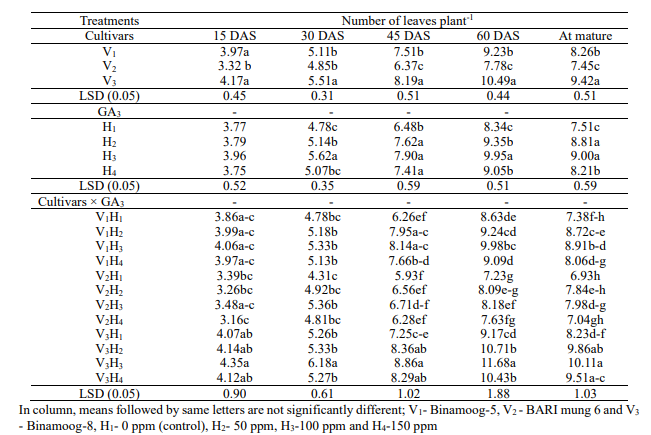 Table 3. Effect of GA3 on leaf area plant-1 of summer mungbean and their interactions 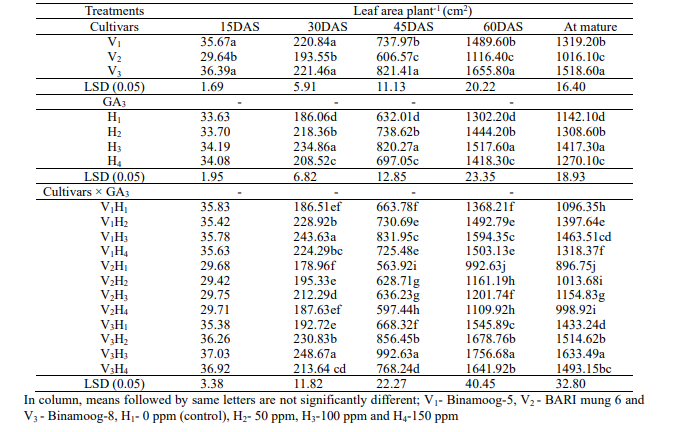 Table 4. Effect of GA3 on dry root weight of summer mungbean and their interactions 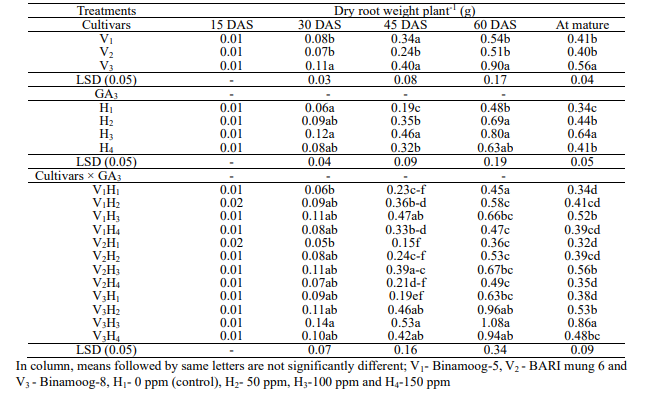 Number of root nodule: The giberellins are also able to regulate the legume nodules production indicated recently. Hayashi et al., (2014) reported that the GA3 is important at two different growth stages of nodulation including the early stage of root colonization and the late stage of nodule production and maturity. A significant difference in number of root nodule was observed at all growth stages among three cultivars of summer mungbean (Table 5). Number of root nodule was the maximum (25.03, 49.69, 94.46 and 63.64) in V3 (Binamoog-8) and minimum (20.81, 35.50, 79.14 and 49.53) was observed in V2 (BARI mungbean) at 30 to 60 DAS and mature stage, respectively (Table 5).Number of nodule plant-1 differed significantly among four concentrations of GA3 at different days after sowing (Table 5). GA3 at 100 ppm had significant effect on Binamoog-8 producing of root nodule at 30 to 60 DAS and at mature stage while the lowest number of nodule was observed in control. The interaction effect of cultivars and different concentrations of GA3 were also statistically significant at different days after sowing (Table 5). Developments of root nodule are mainly dependent on phosphorous availability and the function of root nodule forming bacteria. Growth regulators cause increase in activity of root system and enhances biotic activities in the rhizosphere. Similar findings were reported, who stated that the foliar application of nutrients and growth regulators found to increase in the morpho-physiological parameters, number of root nodules plant-1 and dry weight of nodule in soybean by the foliar application of hormones and nutrients (Raut et al. 2017, Ketki and Thakare 2006). Foliar application of GA3 induced this effect at all the concentration applied. The present finding was in good agreement with Uddin (2009). The greater numbers of root nodule are beneficial for fixing atmospheric N2 by rhizobium bacteria resulted in N supply in soil. The present study indicated that the higher root nodulation produced by foliar spraying of GA3 might nourish N requirement for the mungbean plants, which might have supported N nutrition. Higher nodule formation in summer mungbean roots applying NAA application was reported by Ferrdous et al. (2012).

Table 5. Effect of GA3 on number of root nodule of summer mungbean and their interactions 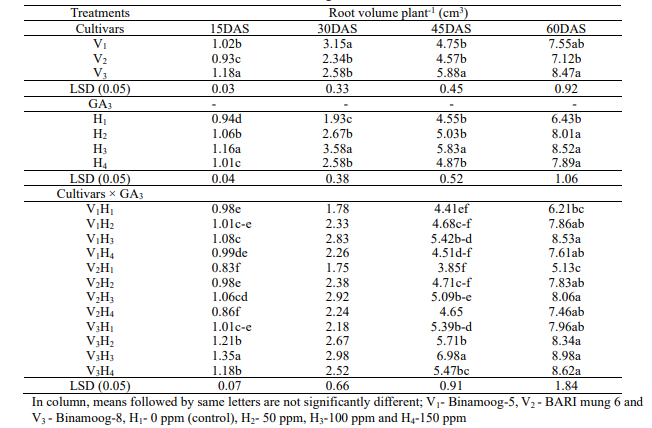 Table 6. Effect of GA3 on root volume of summer mungbean and their interactions

Proline content: Proline content was non-significant among the cultivars and ranged from 1.35 to 1.41 mg g-1 FW but was significantly influenced by the application of different concentrations of GA3 (Table 7). The highest proline content (1.41 mg g-1 FW) was obtained in H4 while the lowest (1.33 mg g-1 FW) was obtained in H3 (without GA3). The interaction effect of cultivars and different concentrations of GA3 was also statistically significant on proline content (Table 7). The highest proline content (1.45 mg g-1 FW) was obtained in V3H4 while the lowest proline content (1.31 mg g-1 FW) was observed in V2H1. From the present investigation, important role of GA and proline was observed when applied as foliar spraying on mungbean. Proline application results in its rapid uptake and coupled with its synthesis in plant, thereby increasing the endogenous level of proline and also plays an important role for osmotic adjustment against various stresses (Ahmed et al. 2011). In addition to the role of osmo-protection, proline protects the enzymes, protein structure, cell organelles and membranes by checking lipid peroxidation and facilitates the energy supply for plant growth, and effective quencher of ROS formed through life cycle of plant and enhanced the activity of antioxidant enzymes. and therefore, proline increases resistance to unfavorable climatic conditions (Ashraf and Foolad 2007).

Table 7. Effect of GA3 on chlorophyll, carotenoid,prolineand seed yield of summer mungbean and their interactions 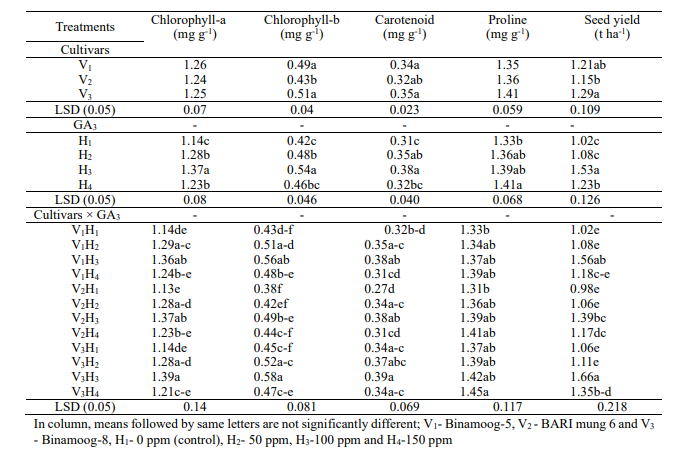 Ketki G and Thakare RD. 2006. Effect of foliar sprays of nutrients and hormones on morpho physiological parameters of soybean. Journal of Soils and Crops. 16(2): 421-428.

Noor F, Hossain F and Ara U. 2017. Effects of gibberellic acid (GA3) on growth and yield parameters of French bean (Phaseolusvulgaris L.). Journal of the Asiatic Society of Bangladesh Science. 43(1): 49-60.

Porra RJ. 2002. The chequered history of the development and use of simultaneous equation for the accurate determination of chlorophylls a and b. Photosynthesis Research. 73: 149-156.

Sarkar PK, Haque MS and Karim MA. 2002. Growth analysis of soybean as influenced by GA3 and IAA and their frequency of application. Journal of Agronomy. 1: 123-126.